As this year’s Pride Month draws to a close, I’m reminded of a 1993 column I wrote for the Florida Flambeau, a little newspaper that served as Florida State University’s unofficial journalism school.

My piece was set against the backdrop of rising hate crimes against gay people (there was no alphabetical description for us yet, we were just “gay”) brought about by the “Don’t Ask, Don’t Tell” policy and the Defense of Marriage Act (DOMA) debate, as well as a Colorado amendment denying gay people protection for basic civil rights such as fair housing and employment.

DOMA was passed by Congress to define marriage as the union of one man to one woman. It was drafted to abate the fear that if states granted same-sex couples the right to marry, the federal government and other states would have to honor those marriages. Imagine that today, a day that marks the anniversary of the Stonewall Riots. 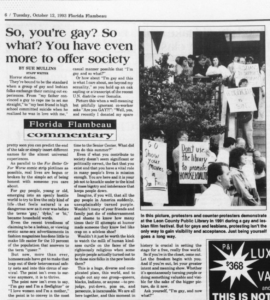 In my column, I asserted that “for gay people, emerging into an openly hostile world to try to live the only kind of life that feels natural is as dangerous now as it ever was.”

I pondered that people must be fearful of us gay folks using up all the marriage licenses, or maybe that gay couples would ostensibly reproduce, guaranteeing that eventually all of society would be gay and our entire species would go extinct.

But I also knew full well our history and the violence visited upon us over the millennia. I convinced myself that if only society understood how statistically normal we were as a part of the human population, somehow we might be accepted and live in some kind of post-gay world.

“Imagine, if you will, that all the gay people in America suddenly, unexplainably turned purple,” I posited in my commentary. “Wouldn’t it just be worth the kick to watch the milk of human kindness curdle on the faces of the righteously religious when some purple people actually turned out to be those nice folks in the pew beside them?”

I implored my gay brethren to come out and just carry on. “Let the freedom begin with you,” I wrote. “And if you’re out, let your greater intent and meaning show.” Be yourself, show how ordinary you are, but be extraordinary, I tried to appeal in my awkward college voice. Because all minorities know we have to try harder, work harder, be pleasant, and be acceptable.

It may appear to some that we’re in a post-gay world now. You couldn’t surf the internet this month without floating past nearly every corporate logo somehow incorporating a rainbow flag, or witness the waves of equality gear pitched in every digital ad. But that’s just corporate America finally doing the math. We are everywhere.

The country has made strides, of course. We can marry, make dinner, and squabble just like straight people can. We can file and pay our taxes jointly. We can fight and die for our country proudly, and tell them who’s doing the fighting.

But with every forward motion, there is backlash. In a concurring opinion in the case that overturned Roe vs. Wade just this week, Supreme Court Justice Clarence Thomas wrote that the high court has a “duty to ‘correct the error’ established in” Obergefell vs. Hodges (2015), which legalized same-sex marriage, and Lawrence vs. Texas (2003), which protects same-sex relations. And yes, it was illegal until 2003 for an adult Texan to choose with whom they would make love.

For a while, my youthful optimism produced unabashed joy at the amazing progress society made, as we got on with our lives outside that one-dimensional bubble people assign us. But now I fear again for us all. In an instant, my wife of 22 years could turn into my roommate. The years and efforts it cost us to simply put a house in both our names and be able to make health care decisions for one another can all be erased. I would not be her next of kin should she need me.

We are not in a post-gay world any more than we’re in a post-racial world.

We must continue the fight for equality — the right to just live equally under the law. Pride Month exists because we have to fight for equality again and again. My heart aches to know that almost 30 years later, I again have to plead to those like me, “Whether it’s spontaneously turning purple or doing something valuable and visible for the sake of the bigger picture, do it now. Ask yourself, ‘I’m gay, and now what?’”